Belkin’s WeMo lineup of home automation products has been immensely popular since they launched back in 2012. A slew of smart plugs, bulbs, and cameras have led their respected industries. But the cornerstone of this lineup has always been their WeMo Light Switch. A chic, wi-fi enabled single-pole light switch that does not require the purchase of any hub.

The WeMo Light Switch looks like your typical decorator rocker switch with a small round light near the bottom. The switch doesn’t physically lock in place in the up and down position but instead works as a large button. The button gives a satisfying click when it’s been activated. When the power is on, a small green light will illuminate on the switch, and will turn off when the device is off. While the light is noticeable, it’s subdued enough that it won’t distract you. An unexpected and much-appreciated feature is that when the device is off and the room is dark, a small white light can be seen on the switch. This is great for someone like me who constantly finds himself groping the wall trying to find the light switch in a pitch black room.

Underneath the switch are two discreetly placed buttons that allow you to restart the device in the event of an error, or reset it back to it’s factory default settings (this requires holding the reset button for a number of seconds). We really liked the faceplate which was screwless and easily snapped in around the switch. Unfortunately if your outlet has multiple switches, you won’t be able to use the included faceplate. Although generic plates from your local hardware store will work. Overall, Belkin has made a light switch as attractive and functional as you can ask for from a design perspective.

We suspect that the installation stage of the Belkin WeMo Light Switch is the most concerning for consumers. It does require a bit of electrical knowledge and some patience, but overall is not that complicated. While the instructions that came with the device didn’t provide much guidance, we were happy to find that Belkin has a comprehensive video that walks you through the steps required to install the switch. You’ll be happy to know that it connects just like your old switch, there is no special wiring needed. It’s worth noting beforehand that the WeMo Light Switch will not work with 3-way switches and does require that your current setup have a neutral wire.

Upon installation and turning the breaker back on, you’re ready to connect the switch to your wi-fi. You’ll first need the WeMo app available on both iOS and Android. This app not only works in conjunction with the switch, but also any other Belkin WeMo products you have. The app walks you through setup which is fairly straightforward. You first connect to the private network of the WeMo Light Switch with your phone. From there, you will be prompted to choose the wireless network in your home and enter the network key to have it connect. While we’ve had some issues with other WeMo issues connecting right away, the switch did so on the first try. And this was coming from a room about 30 feet away. Upon connection, we were prompted to update the firmware and did so without issue. 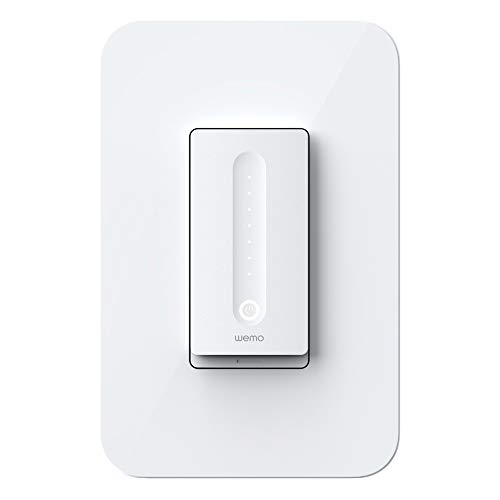 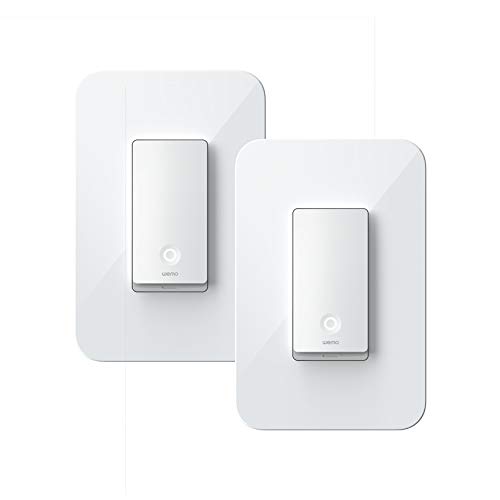 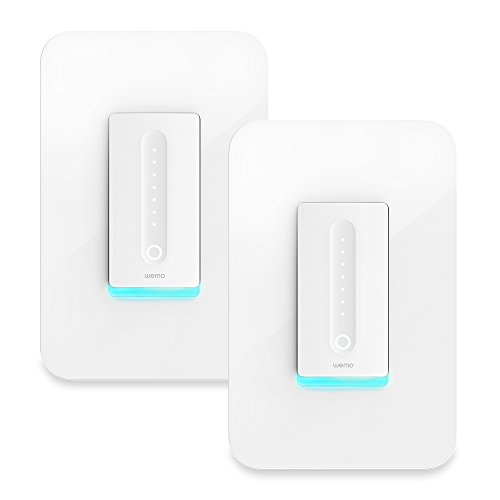 With the connection and firmware updates complete, we were finally ready to use our switch. We first changed the name of it in the app to “ceiling fan” and it was now listed on the main alongside a couple WeMo plugs that are in use . A bright green button sits to the right of the name on the app and turning on and off the switch is as simple as touching that button. It worked immediately and lag was perhaps a fraction of a second at most. When testing using our phone off the wireless network, it did take a little longer but we’re still talking a second at most.

While playing around with the on/off switch was fun, we really wanted to see if this could provide some more advanced home automation tasks. Setting up “rules” as they call it is how you set schedules and timers. My goal was to have the ceiling fan in my bedroom turn on when I got in bed around midnight and run for 2 hours before shutting off when I’m sound asleep. Unfortunately, this part of the app is not user friendly at all. It’s unnecessarily complicated to setup basic scheduling tasks and going back to review them at a later time requires multiple steps. You’re also much better off setting up a new rule as opposed to trying to change an existing one. These seem like app issues and I hope that WeMo will simply improve that over time. On a positive note, there are some nice options where you can have switches go on and off based on the sunrise and sunset in your zip code.

As for the performance of the rules, it was a bit flaky. The first two nights the switch went on and off as scheduled, but the third I woke up to a fan still running. I decided to set up more rules to see how reliable it was and I’d say it worked about 95% of the time. For an appliance like a ceiling fan, this isn’t a big deal. I’d however be a little nervous using this to control an air conditioner that you may want to turn off when you’re away. You may come home to an ice box.

One important note is that when the router was reset or internet issues arouse, the WeMo Light Switch would not always reconnect. It would require hitting the restart button on the switch which solved the problem. The switch does work when wi-fi is off. So outages won’t prevent you from turning on devices. However we did notice that when it does reconnect, it will default to whatever setting you have in the app.

Compatibility a Big Plus

Like other WeMo branded products, the wi-fi light switch is compatible with Amazon Alexa and Google Home so that you can control it with voice commands. The setup to both was incredibly easy and the voice commands worked without a hitch. IFTTT support is also included and comes with a customizable long press option. There are already some fun actions and triggers to play with. One that I found particularly interesting was having it log in a Google Drive spreadsheet each time the switch was turned on. This could be a great way to monitor if the kids are playing past their bedtime or if someone was snooping around a room they shouldn’t.

Last but not least is the integration with Nest. On the surface this seems mundane as everyone seems far more concerned with voice controls, but the ability to automate your away mode can provide some great benefits. Perhaps you’d like the lights to be off in the house when you’re away as to not burn through electricity. Or perhaps you’d like to have certain ones on to give the illusion you’re home for added security. And for someone like me, I love being able to set up that ceiling fan to kick on if the temperature reaches a certain level. Nest integration is still not as prevalent as we’d like to see and I think this gives Belkin’s WeMo line an advantage for those who already own the thermostat.

The Belkin WeMo Light Switch is right at the top of smart light switch industry. It’s a tad pricier than some of it’s main competitors, but it also has the most integration options (Amazon, Google, Nest, IFTTT). We’d like to see the app become a bit more user friendly and it’d be great if it didn’t require a neutral wire to install. But it’s built well, fairly reliable, and doesn’t require an expensive bridge or hub to work. Unless you have a tight budget, we recommend the WeMo Light Switch.

Summary
The simple wi-fi enabled light switch from Belkin WeMo does not require a hub and can be controlled remotely through an app. It's impressive design, voice control compatibility, and reasonable price makes it a favorite of ours.
Features8.6
Ease of Use8
Design9
Performance8.2
Value7.6
Pros
Compatible with Amazon Alexa, Google Home, Nest, and IFTTT
Attractive modern design and screwless faceplate
Long press feature to trigger other devices in the home
Cons
Requires a neutral wire at your switch
WeMo app is not user friendly in regards to advanced settings
Internet outages sometimes caused switch to need to be reset
8.3
Overall Score
Check Price