While prices for smart plugs have come down a bit in recent years, you’re still looking at $30-$40 for one that provides energy monitoring. When we spotted the Geeni Energi Energy Tracking Wi-Fi Smart Plug selling for under $20, we did a double take. While connected plugs are great first steps into smartening up your home, they’ve always felt like a poor value considering the limitations on what they can be used for. But at less than $20, that’s a game-changer and we were anxious to see how it worked.

Upon first glance the Geeni Energi looked familiar to us. That’s because it’s a near upside-down copy of the popular, but dated WeMo Switch Smart plug. It’s a single 3-prong socket that plugs into the wall and allows for one device to be plugged into it. The Energi is a bit bulky and it’s off-white exterior doesn’t offer much in terms of aesthetics. There’s also a rather bright green Wi-Fi symbol that is always on when connected and we couldn’t find a way to turn off. It is however slightly smaller than the aforementioned WeMo Switch which means it won’t block the second outlet as long as you’re using the bottom (or right) outlet.

Similar to other Geeni products, the Energi is Wi-Fi enabled and doesn’t require the use of a hub. It does require the installation of their app which is available on both Android and iOS. The app immediately prompts you to create an account which ties to a phone number. This is a bit disappointing if you’re just looking to use it for one product. The rest of the setup is actually much easier than others on the market that require you to first connect to the devices private network before connecting it to the wireless network. Instead, the Genni Energi simply finds the closest wireless network and prompts you for the password. Our testing found it did require a couple attempts to connect to our home Wi-Fi although nothing we haven’t seen from countless other smart home gadgets. 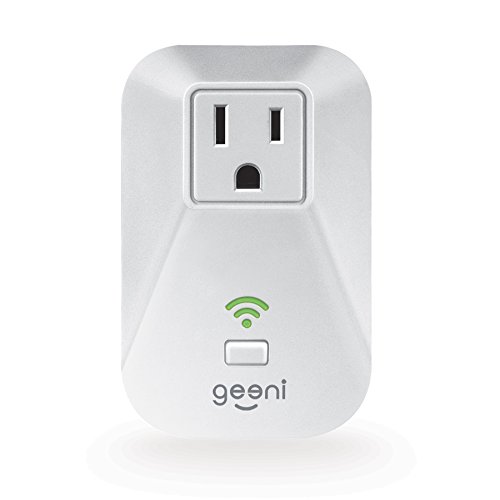 Performance wise, the Energi stacked up as well as others on the market. The app has some rough edges but worked admirably in turning on and off devices that were plugged in. A slight lag exists, but nothing out of the ordinary. The app allows for scheduling which was fairly straightforward and could even be setup to work as a sleep timer. For more advanced users they offer up “scenes” which lets you create rules of sorts with other Geeni devices you have in your home. For instance if you own other Energi plugs, you can create a rule for the upstairs lamp to turn on when the downstairs lamp turns off. It’s an ambitious feature that requires some patience to set up properly, but it also feels like something that is unnecessary if they could support IFTTT.

Which brings us to compatibility of the Geeni Energi. For a budget smart home item, we were pleasantly surprised that it supports voice control with both Amazon Alexa and Google Home. Both were a breeze to setup. It however doesn’t integrate with Apple HomeKit, although there isn’t a whole lot of budget products that do. We were a bit disappointed that it isn’t currently compatible with Nest like the WeMo. But perhaps most puzzling at the moment is it’s lack of support for IFTTT.

One bonus feature we did appreciate was it’s electrical monitoring capability. These typically add an extra $5-$10 to your average smart plug but come with the standard Geeni Energi model. In fact, the energy monitoring was more robust than what is currently offered with TP-Link and WeMo products. Not only does it collect data over long periods of time, but also offers real-time statistics. It was a handy guide to seeing the energy my gaming PC was actually drawing at specific times.

While the Energi stacks up quite well with it’s more expensive counterparts, there are areas where you see the budget side of things peak their heads out. The most glaring is the maximum load current which is set at a meager 10 amps. This is 5 amps lower than the WeMo Mini Smart Plug. This is important as it makes it dangerous to use with products such as space heaters and window air conditioner units that might benefit from a smart plug. And while we didn’t come across any security issues in our testing, we did notice a lack of firmware updates being pushed out by the company. In fact, we aren’t even sure the app has that capability at this time. And speaking of the app, the Android one hadn’t been updated in 4 months as of this review.

The Geeni Energi defines the word budget and there is nothing wrong with that. It’s perfectly capable of handling the basics of a smart plug and will even sync up with Amazon Alexa and Google Home. But it’s design feels dated and some of the other features just aren’t there. If you’re looking for a simple way to set a lamp on a timer in your living room, we highly recommend the Energi. You’ll be happy saving a few bucks over the big brands. But if you’re not married to the Geeni brand and are planning to soup your house up with other smart gadgets, we’d steer toward brands like TP-Link and Belkin WeMo which have bigger product lines, better compatibility, and more robust updates.

Summary
While it won't blow you away with it's looks, the Geeni Energi is a great budget smart plug for those looking for some basic functionality with a sprinkling of Amazon and Google compatibility.
Features7.4
Ease of Use7.5
Design5.6
Performance8
Value7.5
Pros
Compatible with Amazon Alexa and Google Home
Built-in energy monitoring software
Great value for the price
Cons
Not compatible with Apple HomeKit, Nest, or IFTTT
Bulky design with annoying always on LED light
Maximum current of 10 amps
7.2
Overall Score
Check Price