While the industry has been flooded with individual smart plugs, there’s been a lack of smart surge protectors on the market. Perhaps this simply comes down to demand, but we can see how the added surge protection and extra outlets could be enticing when adding some automation to your home. It’s why we were excited to come across the Geeni Surge in our search for one. Geeni is a newcomer in consumer electronics that we had gotten familiar with in our review of their Geeni Energi smart plug. We deemed that product a nice buy if you’re on a budget and was hoping the surge protector would be the same.

The Geeni Surge features 4 outlets for plugs and 4 USB ports on the end. It sports a modern looking white exterior with an almost Carolina blue shade of LED lights. While the USB ports are situated in a convenient spot, the electrical outlets were bunched too tightly. Plugs with some girth or a box could block the outlet adjacent to it. And since the outlets were aligned vertically, you can’t dangle one of the larger power plug boxes off the end. Considering surge protectors are used for higher end electronics which can have oversized plugs, this was a huge flaw. We’d have much preferred two less USB ports (four is a bit overkill) if it meant better spacing for the outlets.

Our issues with the design didn’t stop there though. While we liked the overall aesthetics of the Geeni Surge Smart Wi-Fi Surge Protector, the bright blue LED wifi light was an annoyance. While electronics typically feature some lighting, the Surge is bright enough to reflect off the wall or furniture. And above each plug is a smaller blue LED that while not as noticeable, adds to the distraction the unit creates. It felt like having a nightlight in the room. And to add to the issues, the insistence of lights above each outlet makes the power strip a bit fatter than standard sized ones. One positive however was the length of the cord which gives you a few feet to work with.

Setting up the device was quite simple. Geeni doesn’t require a hub for their products and instead connects directly to your existing Wi-Fi. You’ll be required to download an app on your smartphone that is available for both Android and iOS. It will walk you through setting up an account and then connecting to your wireless network. With the surge protector about 20 feet away from the router, it was able to connect on the first try. One perk with the Geeni app is that you can control their other products (plugs, LED bulbs, camera) in the same place.

Each outlet can be controlled separately through the app while the four USB ports function as one unit. Having control over the USB ports seems kind of pointless (especially when it’s all or none) and while it doesn’t hurt the product, it seems like an unnecessary addition. The electrical outlets can be renamed in the app by clicking the pencil icon in the bottom right hand corner of their box. Turning on and off is easy and testing both a lamp and a fan showed a half second lag while on Wi-Fi and just under 2 seconds when the phone was on its cellular network.

There are more advanced features in the app but the user interface left a lot to be desired. It felt like a chore setting up a simple timer function to turn the lamp on and off at specific times. You’ll have to set these by individual day instead of by weekday or weekend. There’s an option for “scenes” which quite frankly felt like it was designed for another product altogether. And with practically no manual in the box or tutorial within the app, it felt like I was winging it trying to figure out how to make items work in tandem.

On a more positive note, the Geeni Surge is compatible with both Amazon Alexa and Google Home. You’ll need to download the Geeni skill for it to work with Alexa while Geeni is listed as a device under the Home Control section on the Google Assistant. Both require logging into your Geeni account. As for performance, it worked flawlessly on both. We were able to turn on and off each device individually with the proper voice commands. 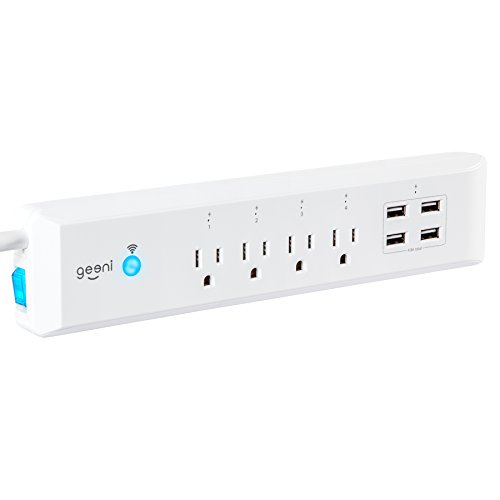 While the functionality of the Geeni Surge was fine, we weren’t terribly impressed with the specs. The maximum current for the device is 10 amps which is 5 below even a standard budget surge protector. This lets you hook up a few minor items like a lamp and fan, but it might not be enough to handle a home entertainment center or gaming PC with monitors. We certainly wouldn’t trust it with a high energy device such as a space heater. When it came to USB ports, it states it can provide 4.8A total but that’s spread across 4 ports. That means a maximum of 1.2A which is low for modern smartphones and tablets. In our testing, it took almost 3 times as long to charge a Galaxy S8 through the Surge and it rarely went above 1A on our meter.

With any surge protector, the Joule rating is something to note and we were a little concerned at the conflicting information regarding this product. The Geeni website states 900J surge protection but every major retailer lists it at 460J. At 460J, it’s below budget non-smart surge protectors that can be purchased for under $10. There also appears to be no light showing that the protection capability is active which is a common feature on standard strips. The device is ETL certified.

Smart surge protectors are tough to come by and perhaps that’s because we don’t really have a lot of items that work in a simple on/off capacity. While Geeni does cater toward budget consumers and is not well-known, we do feel they’re a significant step up from the fly-by-night companies on Amazon selling uncertified garbage. The Geeni Surge has egregious design flaws and isn’t that robust a product, but if you absolutely need a Wi-Fi enabled surge protector, it’ll handle the job. However, we think you’d be much better off saving the money and sticking with a standard surge protector and using mini smart plugs on an individual basis.

Summary
Smart surge protectors is a barren wasteland and while we wanted to like it, the Geeni Surge just didn't offer a compelling reason to buy. Some head-scratching design decisions and a less than stellar hardware profile made our old dumb surge protectors more appealing.
Features5
Ease of Use6.7
Design3.5
Performance7.9
Value4.3
Pros
Works with Amazon Alexa and Google Home voice controls
Connects to WiFi and does not require a hub
Can control each outlet individually
Cons
USB ports provide low charging output
Unnecessarily large with bunched up outlets
Always on LED is far too bright
5.5
Overall Score
Check Price