Honeywell launched the original Lyric thermostat in 2014 to tepid reviews. Issues with compatibility, it’s away mode, and an underwhelming app plagued the smart thermostat. With the second generation of the Lyric, Honeywell hoped to right some of those wrongs and become a leader alongside Nest and ecobee in the space. While improvements have been made, it still falls quite short of dethroning the leaders.

Setup was not a Breeze

Installation of the unit to the wall was fairly straightforward if you’ve ever swapped out a thermostat before. The base plate clearly marks where the wires go and a well-documented user manual helps fill any gaps. While Honeywell states that a C-wire is not required unless you want to use Apple HomeKit, we feel that you’ll be burning through batteries at a rapid pace without it. You also run the risk of low batteries causing issues with the thermostat at inopportune times.

Unfortunately, getting it on to the wall was where the easy stuff ended and frustration kicked in. You’ll need to download their Lyric app which is available on Android and iOS. This allows you to connect the Lyric directly to your smartphone so that you can set it up. That worked just fine but the next step of connecting Lyric Round to your home’s Wi-Fi turned out to be an annoyance. It took about 4 tries and a reinstall of the app before it finally connected. From there the remainder of setup involves telling the app what heating and cooling system you use and what temperatures you’d like to maintain in the house.

The rise of smart thermostats have certainly caused the design teams to up their game from the dingy off-white monstrosities from the past. And while the Honeywell Lyric Round is not my favorite of the new age thermostats, it might just be my favorite looking. A gorgeous white face is covered with a glass touch-sensitive display. The edges feature just the right amount of a chrome trim to accentuate the device. Without the Honeywell logo emblazoned on the bottom, I’d believe this came right out of Apple’s design studio. While some thermostats want to be the center of attention in a room, I think the Lyric just wants to fit in and it does that well.

A round 1.4 inch LCD display stands in the middle and by default shows the current temperature in the home. This display also is used for enabling more advanced settings directly on the device, although Honeywell seems to prefer users carry out these tasks on their phone app. To the right is a home icon which you can use to let the device know you’ll be leaving and to turn on your away settings. The cloud icon to the left will pull up the local weather forecast for the day. The display works with a motion sensor to illuminate at a brighter level when you are in front of it. 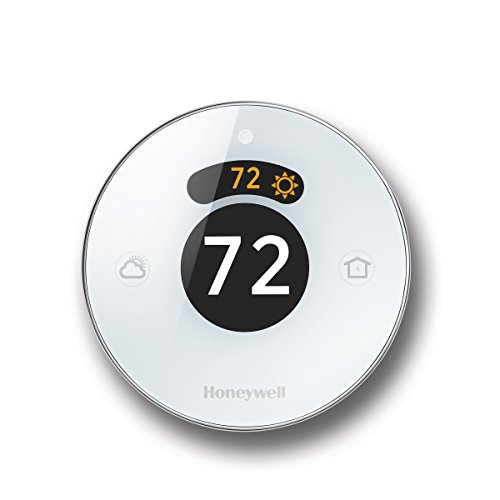 While I loved the look of the Honeywell Lyric Round, I wasn’t as impressed with how it performed in my home. One of the most heavily marketed aspects of the device was their geofencing. This allows you to setup a custom radius around your home to let the Lyric know to move to your away setting when you’re outside that zone. Upon re-entry into the geofenced zone, it will kick back into it’s normal setting so you arrive at a comfortable home. This in my opinion should be the cornerstone feature of the Lyric as it offers up something most other smart thermostats don’t. The ability for your home to know precisely when you’re home and away without interacting it or have it “learn” your schedule is tantalizing.

Geofencing was simple to setup in the app, but the feature was spotty in real-world use. I’d say it recognized me leaving the zone about 50% of the time. The app needs to be running in the background to work (not great for battery life) and won’t work if you happen to cross that geofence while in a spot with a bad signal. Honeywell claims the device will check in regularly to ensure you didn’t cross out of that geofence radius without it noticing, but we never saw it successfully do so. So what should be the most important feature on the Lyric turned out to be totally unreliable. And a lack of remote sensors with the device makes that flaw worse.

Honeywell did seem to hedge on this feature a bit by adding in shortcuts. This allows you to a preset temperature in the home with the push of a button on the app or during specific times of day. It’s a bit cumbersome to setup but does work. The only problem with this is you no longer are using a smart thermostat, you’re using an expensive programmable one that could be purchased for a fraction fo the cost.

Another concern when using the product was frequent drops in the Wi-Fi.

With that said, I did like the simplicity of the Lyric. The device interface requires nothing more than a button tap and a turn of the dial (again, I love the dial) to set the temperature. The weather integration is a nice touch to let you know if you can keep the air off on a cooler Summer day. Unfortunately there was no option to turn on the fan on the actual device, you had to boot up the app to do so.

The app overall has improved a great deal and even a tech novice should be able to pick it up quickly. Smart alerts are integrated into it that provide push notifications in the event extreme temperatures are detected in your home. They’ll also send you a friendly reminder

One of the stronger aspects of the Lyric is it’s compatibility with popular home controllers. As of this review it works with Alexa, Apple HomeKit, Google Home, Samsung SmartThings, and IFTTT. Testing it with the Amazon Echo, it worked great and the voice commands made it easy to control the temperature.

The Honeywell Lyric Round is an attractive smart thermostat with some nice functionality that is unfortunately held back by it’s most important feature: geofencing. Without it and remote sensors, you’re dealing with a fancy looking programmable thermostat that can be integrated with popular smart speakers for voice command functions. Geofencing is an ambitious feature and I hope Honeywell continues to push to improve it. With it, you might be looking at the best smart thermostat on the market. But unfortunately due to its unreliability, the Nest or ecobee3 make better buys at this time.

Summary
Honeywell's Lyric Round is an ambitious smart thermostat that brings exciting geofencing technology to our daily lives. Despite it's efforts and array of integration options, the performance falls a little flat in it's most important feature.
Features8.6
Ease of Use7.9
Design7.7
Performance7.3
Value7.4
Pros
Excellent notification system
App usability & setup is a breeze
Integrates with most smarthome platforms
Cons
Geofencing is very spotty
Price seems high compared to new competitors
Tough screen display is small
7.8
Overall Score
Check Price