With the millions of Echo devices sold, Amazon’s Alexa has become a valuable companion inside our home. We ask Alexa to play music, set reminders, and manage our smart home gadgets. But once we step outside our home, our virtual assistant disappears and we’re stuck with with Google Assistant and Siri on our phones.

The Roav Viva by Anker is an attempt to change that by making Alexa available in our car. The concept isn’t new however. Amazon has already teamed with car manufacturers like BMW, Ford, and Toyota to have Alexa built-in. And Garmin hit the market with their Speak and Speak Plus accessories which essentially are a mini Echo device with a tiny navigation screen you can mount to your windshield.

But not everyone is willing to buy a new car just for Alexa integration. Nor are they looking to spend $130 for the Garmin Speak. That’s why the Roav Viva’s $50 price tag is intriguing and makes them a clear option for those who crave the functionality of Alexa in their car at an affordable price.

At first glance, the Anker Roav Viva has the familiar look of a car charger that plugs into your cigarette lighter. There are two USB-A ports that use Anker’s PowerIQ charging capability. Phones charge relatively quick and there were no overheating issues when plugging two in at a time. 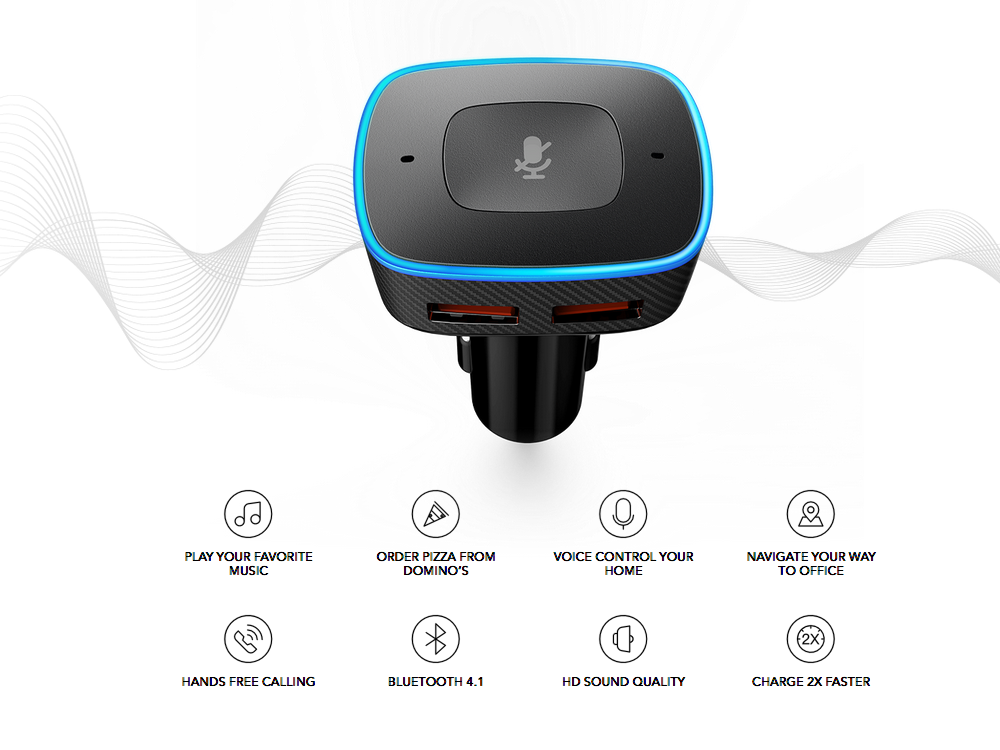 The face features two microphones with a noise cancelling chips inside which is supposed to block out 30% of background noise. A large button sits in the middle that can be used to activate Alexa manually or mute the device. And surrounding all that is the bright blue ring (brightness can be adjusted in the app) we’re with.

Overall it’s a simple, yet attractive design that should fit in most cars. It feels sturdier than most car chargers and can function at some rather extreme temperatures (-4 to 274 degrees Fahrenheit).

Requires Your Phone as Intermediary

While the Roav Viva takes in commands through it’s microphones, it requires your car’s speakers to communicate back. And to do this, it uses your own smartphone as an intermediary.

Upon downloading the Roav Viva app on either iOS or Android, you’ll need to sync the Viva to your smartphone via Bluetooth. This is standard stuff and shouldn’t take more than a minute. From there, you need to decide how your phone communicates with the car speakers. The options here are Bluetooth for newer cars (which you likely already have configured with your car) or plugging the phone into the car’s auxiliary port. Either way, your phone is the middleman between the Roav Viva and your car’s speakers. It took 5 minutes from start to finish to get this part configured.

From there comes tweaking with the settings inside the Roav Viva app. Here you can turn on functions such as “Geolocation” which helps with specific commands like “Alexa, what’s the weather like?” or “Alexa, where is the closest Starbucks?”. You can adjust the brightness of the lights, go into power saving mode (which is pointless if your phone is using the charger too), and choose which navigation system you’d like which include Apple Maps, Google Maps, and Waze.

The first thing you’ll notice upon giving a command is the slight delay. It’s only about 3 seconds, but it can throw you off if you’re used to the quick response from an at-home Echo. This likely is because the Viva has to communicate to your phone which then communicates to your car. And while not a deal breaker in any capacity, it’s a mild annoyance that takes some time to get used to.

Outside of that, it’s everything you’re used to with Alexa. You can ask it about the weather, road conditions, or a recent sports score. You can start your car ride with it reading off your flash briefing. Over 25,000 skills are available including music choices such as Amazon Music, Pandora, and the recently added Spotify. You can ask for directions which in turn will pull up a map on your smartphone. And of course if you have any smart home gadgets at home, you can control them with the same voice commands. Have it turn on the front lights when you pull in the driveway or crank up the heat when you’re 10 minutes out.

There are a few hiccups though with skills. The first being that some don’t work as of yet. The most glaring is text messages. Something that would be incredibly handy to do while driving in the car. The other issue is the microphone just isn’t as intuitive as even the Echo Dot which can lead to it not picking up commands properly. Especially if there is noise coming from inside and outside the car.

Do I really need this?

Overall, I liked the Roav Viva. It’s an innovative idea for those who don’t have a new car with Alexa built-in to add that functionality. It’s relatively easy to setup, works as intended, and doubles as a handy car charger which we all need these days anyway.

With that said, I didn’t use it as much as I thought. Playing music through Spotify via a voice command can be done through Google Assistant or Siri on my smartphone. The same for making phone calls or asking for directions. And while the idea of controlling my smart home through my car was interesting, I just don’t think you run into enough opportunities to use it. Your smart thermostat likely uses geofencing to know when you’re away and other devices just didn’t need to be controlled while in the car.

There is a big caveat however, and that’s Alexa Skills. If you want your flash briefing while you’re driving to work, it’s great. If you’re on a long car ride and want to play some Jeopardy! to pass the time, even better. And with so many skills aimed at kids, it can make a treacherous car ride into something they enjoy.

The Roav Viva is an innovative gadget that unfortunately only caters to a small percentage of people. It’s for people who can’t stand Siri or Google Assistant. It’s for people who love Alexa Skills and wants to take them on the road. And for under $50, it’s not a bad price especially if you planned to buy a quality car charger anyway. The Anker Roav Viva is a creative way of getting Alexa into your car before Jeff Bezos finds a way to have it built-in to every new automobile.

Summary
Alexa is not just for the home as the Roav Viva by Anker provides an affordable way to give voice commands while on the road. But while it's a clever in theory, the question remains whether you really need this.
Features7.4
Ease of Use8.5
Design8.9
Performance6
Value6.9
Pros
Easy way to get Alexa in your car
Syncs with popular navigation tools
Two USB chargers with PowerIQ capability
Cons
Slight delay between giving command and response
Can't send text messages yet
Microphone can be flaky when noisy in car
7.5
Overall Score
Check Price