Smartphones provide great comfort in our lives. We can control countless apps and automate our homes by using them. But they aren’t always the most convenient devices to pick up and use. You’ve got to unlock the phone, open the app, scroll through the options, and pick what you want it to do. This is where Flic comes in.

Flic, in a nutshell, is a wireless button that lets you create shortcuts to actions you want to make on your phone. So instead of picking up your phone and finding the action, you just press the button. This rather unique idea is the brainchild of Swedish based Shortcut Labs. The company proposed this Bluetooth-connected button back in 2014 on a popular crowdfunding site and raised nearly $1 million.

There isn’t a lot to the Flic wireless smart button, but what there is looks and feels great. It measures around 1-inch in diameter with a soft touch silicone exterior that is splash-proof. Pressing the button provides the nice tactile feedback that you’d want. It comes in black, white, teal, and green colors.

The back of the Flic features a re-usable adhesive sticker that stuck well to every surface we tried. You’ll also receive a clip so that you can attach it to your clothes or backpack when out. It’s powered by a replaceable CR2016 coin cell battery that will supposedly give you 18 months of regular use.

Flic connects to your phone using Bluetooth Low Energy. You’ll first need to download and create an account in the Flic app which is available in both the Apple and Google Play stores. The app will walk you through the process which was simple and took only a couple minutes.

While Bluetooth is a great, low energy way for Flic to maintain a connection, it also means your phone has to be close to it for it to function. Upon testing we found the distance to be about 100 feet before the button just didn’t work. But even at 50 feet we started seeing some considerable lag and missed clicks. Walls and floors impeded the connection as well. While this is to be expected with Bluetooth, it does mean that you’ll want your phone in the same room when using the Flic and preferably right next to it. 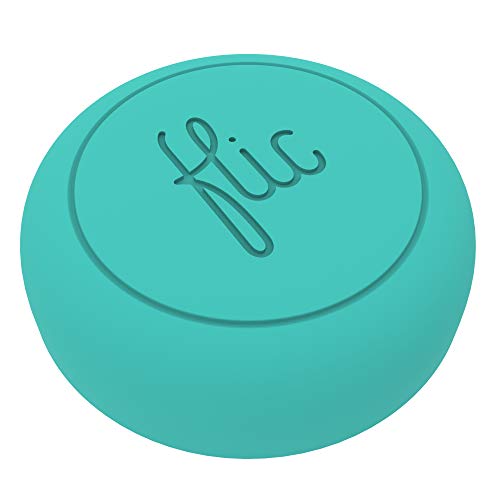 It’s tough to review the Flic because it’s one of those devices that’s usefulness is up to the user’s imagination. Flic has partnered with over a hundred companies to allow you to customize it to your needs. There’s an extensive list of triggers with IFTTT too. There’s juvenile uses like syncing the button to have a farting sound played whenever it’s pushed. There’s functional uses like having it turn off lights in your home. Business uses like tracking the hours you work on a specific client. It’s a button for whatever you want a button for.

One of the nice features Flic added was that each button could be used to perform 3 different functions. There’s a function when you simply press the button. Another function when you press it twice in a row. And another function when you do what they call a “long hold”. So if you’d like to control a smart LED bulb, you could set one for on/off, one for adjusting the brightness, and one for changing the color. These are all easy to set up within the app.

During my time with the Flic, I set it up in my car. I listen to music via Spotify but it’s not quite safe (or legal) to go scrolling through the phone whenever a song I don’t like comes on. So I set Spotify to work with my Flic and attached it to the left of my steering wheel. I could now have the Flic pick a random song whenever I pushed the button. I set two clicks for when I wanted Spotify to save that track to my Songs list. And when I wanted to just listen to the FM radio, I set the long hold button to open Shazam and trigger the song recognition action. While none of this was earth shattering stuff, it was a nice convenience to have in the car and shows just a few of the uses you could come up with for it.

While I see the Flic being used in a car or room, I think it might be most useful when it’s clipped on to you when you’re out. There’s of course some basic functionality like having it hail an Uber or tracking your morning jog. But using the Flic as a safety device might be one of the most intriguing options available. For instance there is a function that will send a text message to specified contacts with your location in it. This might be a nice way to have your kid check in when they’re out with friends (tell them to push the button every hour). Or a way to let a loved one know how far along you are on your drive home.

It’s worth noting that while Flic works with both Android and iOS, the number of options available in iOS is much less. This might be due to how closed Apple’s system is or simply something the development team at Flic hasn’t gotten around to. We noticed major services like YouTube, Twitter, and Skype were not available to iOS users at this time.

I really like the idea of the Flic and had some fun using it. Unfortunately there are some design limitations that hamper the wireless button. First is the Bluetooth pairing. It’s great for a set of headphones or a Fitbit, but not so much for a home automation gadget that you want connected at all times. You want the button to just work when you press it. You don’t want to have to worry about whether your phone is within range.

The Flic App has to be running for the button to work. You’ll also need to have the app you want to manage open in the background too if you want trigger a function on it. Now this may not be an issue for newer phones where you can run 30 background apps without a problem, but it might hamper some older ones. You’ll also have to remember to open those apps on restarts and avoid closing them using a task killer (which I tend to do a lot). This isn’t a deal-breaker per say, but can be an annoyance.

Flic does seem to have a potential solution to these issues in the works. They’ve crowdfunded nearly half a million dollars for a Flic Hub that is pegged for a January 2018 release. The hub will allow you to use over 60 Flic buttons without the need for a smartphone. It’s pegged for release in January of 2018 and is a bit costly at $89. But if you’ve dreamt of having buttons throughout your house that can do all sorts of things, it looks like it could be worth it.

Flic at this stage is a fun gadget to play around with and maybe find some useful functions for. I think the more tech savvy you are, the more you’ll enjoy tinkering with it. Connecting to IFTTT and Zapier alone opens a lot of fun possibilities. But it’s ambition doesn’t match up to it’s overall functionality at the moment. Especially at it’s current price. Perhaps when the hub is released it’ll vault the Flic into a must-have for everyone. Till then, I’d only recommend it for those who have a specific need that fits the button or tech hobbyists looking for a fun gadget they can tinker with.

Summary
Flic is a simple button with some ambitious goals attached to it. It can be the extension to your smartphone you've always wanted, but some limitations at the moment are holding it back from reaching it's true potential.
Features7
Ease of Use7
Design6.3
Performance6.8
Value6.8
Pros
Double-clicking and long holds can enable extra functions
Partnerships with a slew of popular apps and services
Battery can be cheaply replaced if needed
Cons
Bluetooth connection requires close proximity to smartphone
iOS app not nearly as feature rich as Android app
Flic app must run in the background to use
6.8
Overall Score
Check Price