The first thing that struck me about the Geeni Lux line of smart LED bulbs is the price. I’m constantly seduced by the industry to swap out the dumb bulbs in my house and replace them with smart LED ones. Unfortunately, they remain pricey and almost all require an expensive hub. But Geeni is a bit different. At $5-$15 less than their closest competitor, they’re a budget bulb that promises the same features the big boys offer. And all without the need for a hub.

Geeni is the smart home brand name for Merkury Innovations, a company that has been producing consumer electronics for over a decade. If the name sounds familiar, we’ve reviewed their Energi smart plug and surge protector in the past. Their products can be all controlled through the same Geeni app that is available on both iOS and Android devices.

Besides the size and maximum brightness difference, you’ll notice the 800 is the only one that is not tunable. For those who are not familiar with the term, tunable refers to being able to change the warmness of the bulb. A soft white (2700k) is the color you probably grew up with. It has a yellow/orange hue. This is opposite to a daylight (5000k) which is a whitish blue that you might be familiar with from office fluorescent lights. Being tunable means you can adjust this setting. Many people prefer the whiter light during the day and the warmer temperature at night since blue light has been known to mess with sleep patterns. If you’re looking for something more colorful, the Geeni Prism is their multi-color offering.

Setup of all 3 models is the same. Download the app, screw in the bulb, and connect through the app. The Geeni app requires an account with a phone number (which is odd). Through the setup process, you’ll connect the bulb to your wireless network. The bulb will only work on 2.4GHz band, not 5GHz unfortunately. This part required a few tries but eventually connected. 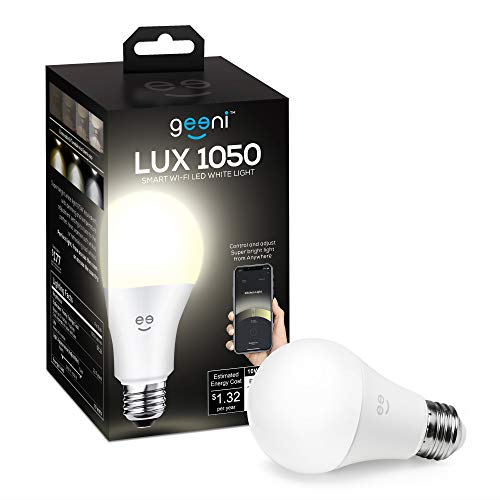 Controlling the bulb through the app was adequate. There is a bit of lag when turning on or off the device to when it receives the signal, but nothing too egregious. Brightness can be controlled easily on the app. Scheduling is where we started running into some negatives. The feature is really basic allowing you to turn on and off the device at specific times. Unfortunately brightness and temperature of the bulb couldn’t be added into that schedule. This is a disappointment as we’d like to be able to have the light reduce brightness as the evening wears on as well as shift to a warmer temperature. The app also offers a “scenes” section where you can have multiple Geeni devices work in tandem. This unfortunately didn’t have a friendly interface and without a bunch of other Geeni products in the home, doesn’t provide much benefit. There is also an option to set the lights to work off your location’s sunrise and sunset but the app kept producing error messages when trying to enable it.

For how the actual bulb performed, we tested both the Lux 800 and Lux 1050. Placed side by side with an Ecosmart LED bulb of equal lumens, the Lux appeared duller. So if you are looking to replace a 60-watt bulb, we’d recommend going with the 1050 which is rated at a 75-watt equivalent to compensate. You can always adjust the brightness down if it’s too much. The dimming function works admirably and allowed the lamp to work as both feature lighting or an accent lamp. The tunable feature also worked although the warmest setting didn’t quite match up with the traditional 2700k bulbs we’re accustomed to. It was a little too cool (white) which may bother those who have a fondness for the old incandescents they grew up on.

One of the bulb’s main selling points is it’s compatibility with both Google Home and Amazon Alexa. This eventually worked, but it wasn’t as seamless as we had hoped. Connecting to both required multiple tries (it doesn’t help that there weren’t any instructions). In fact we were about to give up on Google Home when it suddenly connected. The voice controls on both did work fine once we renamed the bulb to something friendlier. Not only can you turn on and off the light with your voice, you can have it dim or brighten the light.

The Geeni Lux is a budget smart bulb and it definitely shows. But despite some minor quality issues and an unfriendly app, it’s not a bad smart bulb for someone looking to dip their toes into home automation. The price is definitely the best thing going for it and not needing an expensive hub helps too. It’s perfectly fine if you’re looking to control a lamp when you’re away for security reasons, or just want to flex the muscles of your new Amazon Echo. But if you’re more serious and looking to convert your whole home over, I’d feel better paying more for quality and reliability that the Geeni Lux just doesn’t offer.

Summary
The Geeni LUX is one the cheapest smart LED bulbs on the market and might be a legitimate way to smarten up a lamp or two in your home. Without the need for a hub, it's banking on its wi-fi enabled simplicity to make up for it's lack of features.
Features6
Ease of Use6.1
Design7.5
Performance6
Value7.7
Pros
Very affordable price compared to other smart bulbs
Connects directly to your Wi-Fi, no hub required
Amazon Alexa and Google Home compatible
Cons
Bulb performance weaker than name brands
App doesn't provide many features
Lux 800 isn't tunable
6.7
Overall Score
Check Price